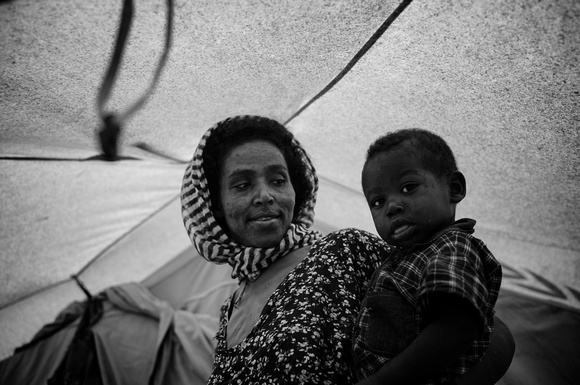 Rather distraught, Shewanesh age 25yo explained how she had lost her husband about a year ago and her struggles to keep two children alive. They both worked for a Chinese road construction company where he was a frontline security worker for the company, whilst she worked as a cleaner for the same company. It was said that he was murdered by armed militia.

Prior to this, they had a family home about an hour’s walk away from Mambuk. They are however fearful of returning to it due to the erratic and sudden changes in security concerns surrounding the militia.
She has since been displaced in this camp now for about 9 months, after her husband’s death. A ration of wheat was received 5 months ago. The camp barely meets basic sanitation hygiene which is leading to problems such as dysentry, typhoid, typhus, and the like. Shewanesh has a scabies-like skin condition that is believed to be linked to this lack of sanitation which however remains undiagnosed. She complains of a fever and generally feeling unwell, which frankly isn’t a surprise considering the environment they are living in.
© liz loh-taylor
Powered by ZENFOLIO User Agreement
Cancel
Continue