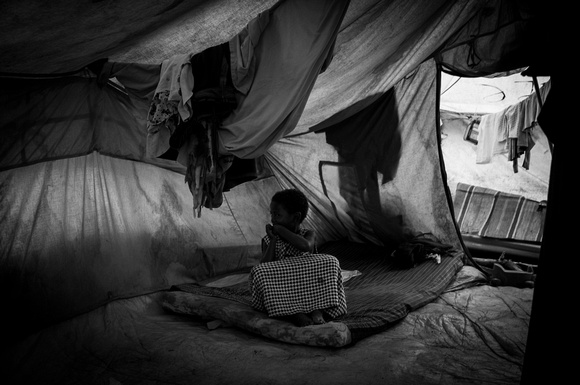 Today we visited the Azati Kitli IDP site in Mambuk zone, Benishangul-Gumuz region. To the left of the camp resided displaced families from the Gumuz ethnic group whilst to the right of the camp was Amhara and other ethnic groups. Considering the nature of the conflict where the armed militia has been identified as Gumuz, it is quite a unique arrangement.

We met 30 year old Enatayehu Senbeta, who has 4 children, 2 to her previous husband who has been killed in the conflict and 2 from her current marriage. She has been in the Mambuk site for about 3 years to date, after having already spent a year in the Chagni IDP site. She currently lives in a make shift tent measuring around a maximum of 3 x 3 square metres, with her 4 young children, current husband and sister. The last ration of wheat was delivered 4 months ago. Facing the need to support her family, they’ve had no choice but to sell some of the mattresses that were donated by aid agencies in exchange for food and survival. There was a single mattress within the space they reside, to be shared somehow, amongst 6 people.
© liz loh-taylor
Powered by ZENFOLIO User Agreement
Cancel
Continue