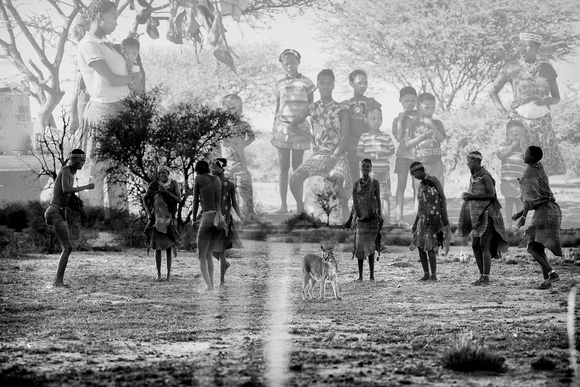 This series of composite images portrays the evolution of the San Bushmen population currently residing in most of Southern Africa. This includes the San people past and present, encapsulation of animal folklores within each image that have played a significant role in shaping the San people to date, their relationship to the land, as well as an attempt to preserve some of what we know of this ancient race.

According to archaeologists, the San are the descendants of the original Homo sapiens who occupied South Africa for at least 150,000 years. Geneticists say that the oldest gene pattern amongst modern humans has stemmed from the San and which dates back to about 80,000 years ago. They also suggest that almost all peoples on the planet are descendants from this original gene type. This entire premise affirms the importance of preserving San traditions and cultures and ensuring these are not lost amongst future generations of San people. As a photographer, I hoped in this first series of images that I can contribute to this conservancy.

These images were all taken in Namibia in October/November 2016 using a Canon 5DII EF100-400mm L and Leica Monochrome 246, 50mm Summilux.